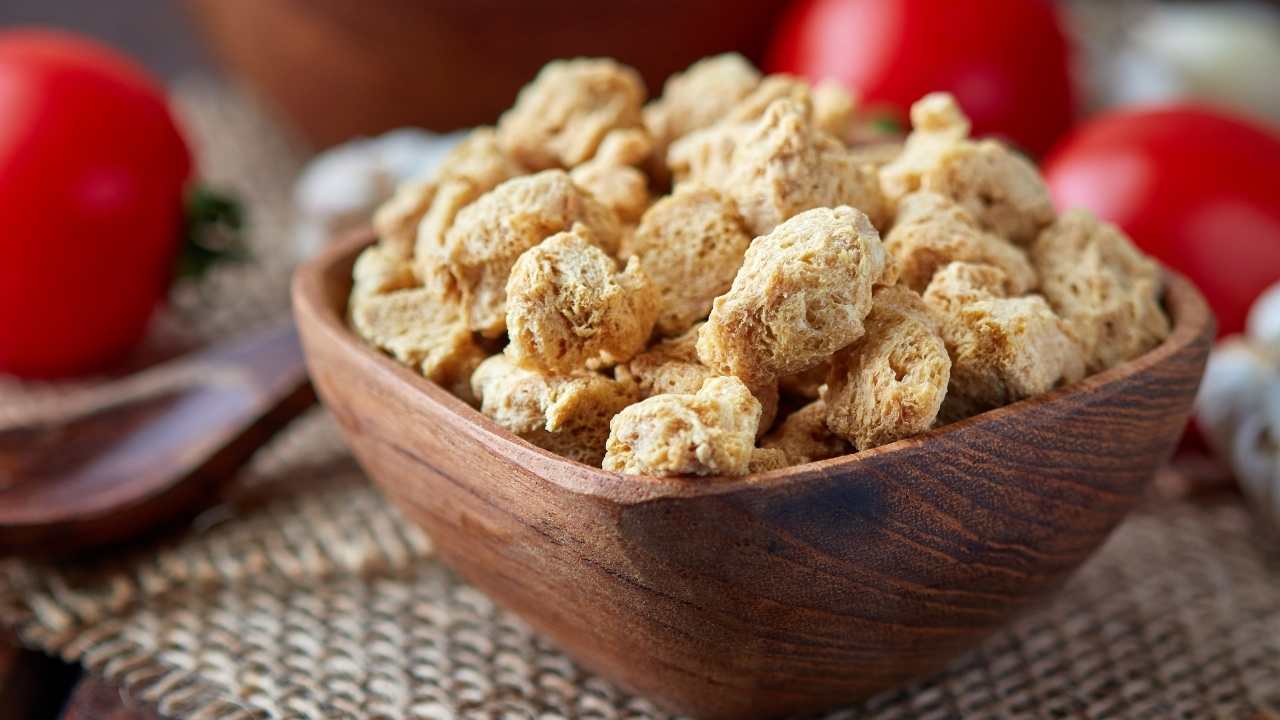 3.9 grams of fiber can be obtained from 30 grams of soya chunks. Fibre also has a major role in weight loss as it helps in increasing satiety hormone which helps in reducing your hunger hormone. The fiber value is fair enough in soya chunks but still in order to enhance its value fiber-rich meals should be paired. Also Know Oats Protein Per 100 grams, Nutritional Value, And Healthy Recipes

soya chunks are made up of

Soya chunks are made of soy flour which has been defatted. The oil has been removed from it. As oil is removed from soya flour it obtains a rough texture. They are dry enough. As soon as soya chunks are immersed in hot water they obtain a soft and spongy texture. These vegan meat bells have the same nutritional profile as nonvegetarians. They are quite versatile enough and can be used in many ways.

Anything in excess could be dangerous. When too much of soya products are consumed in the diet there is an increase in estrogen and uric acid levels in the body. With this, many health problems can be faced such as water retention, acne marks, weight gain, bloating issues along with mood swings.

When uric acid is increased in the body, there are chances of liver damage and causes joint pain. The ideal moderation key is to consume 25 to 30 grams of soya chunks in the diet.

There are numerous health benefits that soya chunks provide to the body. They greatly help in faster muscle building and also boosts metabolism. Apart from that, weight loss is another important benefit of soya chunk. Soya chunks being rich in protein has a good effect on skin, hair, and bones.

As its a fact Weight loss can be achieved with calorie control and also by removing excess fat from organs. So soya chunks are effective weight loss food. It also has so many health benefits like, A study was conducted in 2015 in Journal Molecules in which it was found that soya chunks effectively help to lower bad cholesterol in the body. It also protects the heart from diseases.

The study has discovered that soya chunks help to stop the accumulation of excess fat around the body’s organs. This promotes weight loss. Soya chunks also contain good amounts of fiber which helps to pass stools easily. This helps to feel us full for longer periods of time.

The major added benefit of soya chunks in the diet for weight loss as they promote the feeling of fullness. The urge to eat frequently is greatly reduced. As soya chunks contain plant-based proteins they have weight-reducing and body fat-reducing properties. The human body spends more energy digesting soya chunks than carbs. This in turn greatly helps with a fat burning which promotes weight loss.

There are many advantages that make them ideal to be added to the diet.

1. Work as a great meat substitute:

Since soya chunks hold a great protein value they are ideal enough to be included in the diet to meet the protein requirement. Those who suffer from protein deficiency can add in order to over going through it. Recommended amounts of intake should be taken on a daily basis.100 grams of soya chunks upon addition in diet gives about 52 grams of proteins which is quite high. Read also Morning Walk Benefits For Health and Fitness

They are made of proteins, fiber, omega-3 fatty acids which are great for heart health. Soya chunks are labeled as heart-healthy as they help to reduce bad cholesterol in the body.

One of the added benefits of soya chunks is they help in weight loss. The fiber and proteins in it help us to keep us full for long which reduces consistent hunger pangs. Right intake of it helps with faster weight loss results. Read also Weight Loss Patches and If They Works?

Soya chunks has helpful Digestive benefits, can be aided by both genders that’s men and women. Having soya chunks regularly improves gut health as the level of bifidobacterial shoots up in the digestive tract. Hence very good food for digestion

6. Blood sugar levels can be managed:

Diabetic people should include soya chunks in the diet as they are full of bioactive compounds. Protein and fiber in soya chunks greatly manage their blood sugar levels. The glucose level in the body also can be greatly improved. Soya chunks also helps to prevent diabetes as they helps to increase insulin receptors in the body.

Iron is needed for hemoglobin production in the body. Anemia is a deficiency caused by low iron levels in the body. Soya chunks are rich in iron which ultimately helps to produce healthy hemoglobin levels which helps to prevent anemia.

Calcium is a major macronutrient which is responsible for maintaining healthy bones and teeth. 100 grams of soya chunks provide about 350 mg of calcium which is quite high. So adding up soya chunks in the diet also helps to provide significant calcium levels which prevents osteoporosis in the latter part of life.

Soya chunks are regarded as a wonder food that helps to cut down bad cholesterol in the body, says studies. Soya chunks promote better heart health. A Soya chunk meal is best to consider after working out. The isoflavones in soya chunks help to lower fats in organs which support the weight loss process. Soya chunk’s calories are much lesser than protein values.

Side effects of soya chunks

As soya chunks have advantages it has certain disadvantages that are caused upon eating them in excess amounts. Few of them are

Soya chunks can lead to kidney failure is they are taken in excess amounts. This is due to the presence of phytoestrogens which they contains in them.

Few people are sensitive to what they eat. Digestion could be a problem for them. When excess of them are taken in diet they causes the problems of constipation, flatulence and bloating issues. Therefore eating them in moderation is the best key.

Food stuffs which are rich in proteins have a chance of developing kidney stones in the body. Same way, soya chunks are rich in uric acid. When high uric acid gets deposited in the kidneys it leads to the formation of kidney stones within them. Therefore eating them in moderation is good enough.

Soya chunks when taken in correct proportions can be consumed by men also. They are beneficial even. Soya chunks have Phyto oestrogens in them which are natural plant compounds. They have similar function to that of oestrogen hormone. However, when large quantities of soya chunks are taken in diet they can cause hormonal disturbances. The recommended serving only should be taken in a day.

These balls can serve as a great side dish for major meals. It’s a great protein-rich recipe as it has the goodness of two protein sources in it. it’s great for weight loss and helps to keep full for a long.

How to prepare soya chunks and chana dal balls